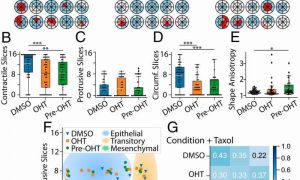 A team of researchers has developed a new technique to map the three-dimensional forces that clusters of human cells exert on their surrounding environment. The method could potentially help scientists better understand how tissue forms, how wounds heal or how tumors spread.

“We know that the way groups of cells interact with their extracellular matrix is important, and we want to understand the instructions that tell these clusters to become organized into tissue-like architecture, or alternatively to become disorganized like an invasive tumor,” said Ian Y. Wong, an assistant professor in Brown University’s School of Engineering and corresponding author of a paper describing the work in the Proceedings of the National Academy of Sciences. “This technique gives us a way to profile these mechanical interactions between cells and matrix in a way that we couldn’t before.”

The new technique makes use of traction force microscopy (TFM), an imaging method that has been widely used to study the forces exerted by single cells. To make TFM measurements, researchers place cells within biomaterials that mimic an extracellular matrix and contain thousands of tiny fluorescent beads. By tracking the motion of the beads as the cell moves inside the gel, researchers can record the ways in which the cell is pushing, pulling and twisting the biomaterial in three dimensions.

The goal of this new technique is to bring TFM to bear on multicellular clusters.

“We know that tumors, for example, tend to be spatially heterogeneous, with cells behaving differently throughout a tumor,” said co-first author Susan Leggett, who led this research while a Ph.D. student at Brown and is currently a postdoctoral researcher at Princeton University. “So elucidating heterogenous behaviors across a multicellular cluster is something that’s important in a clinical context.”

Doing so wasn’t easy, however. Groups of cells each behaving differently can quickly make an analysis messy and imprecise. One of the challenges when dealing with large three-dimensional data sets is how to depict them in a convenient, quick and reader-friendly format. So Leggett and her colleagues came up with what they call DART (Displacement Arrays of Rendered Tractions), which virtually divides the volume around each cluster into 16 distinct regions. By mapping the forces that dominate each of the regions into a “DART-board” display, the technique can capture the differing forces in play within a cluster in an easy-to-interpret format. The approach is similar to the way three-dimensional terrain features are depicted in common landscape or hiking maps, the researchers say.

Co-first author Mohak Patel, who was also a Ph.D. student at Brown in solid mechanics and computer science, helped the team to streamline the image processing required to track the fluorescent beads embedded in the biomaterial. That streamlining enables the technique to image many clusters at a time, arrayed on 96-well cell culture plates. That high throughput, which hadn’t been feasible previously, makes the technique even more powerful, the researchers say.

The team says the technique could have a variety of applications, from basic biology research to clinical cancer research or precision medicine. “Basically in any setting where cells need to move in an extracellular matrix, we can use this technique to look for patterns,” said co-author Christian Franck, an associate professor of mechanical engineering at the University of Wisconsin, Madison.

This technique could be used to study organoids, small clusters of cells whose architecture and function mimic tissues and organs in the body. This approach is based on culturing primary human cells on a dish in order to screen personalized drug treatment. “You could imagine isolating patient cells from a tumor biopsy, culturing them on a 96-well plate, then treating with different drugs to see whether they affect how these cells migrate and divide,” Wong said.