This is an accordion element with a series of buttons that open and close related content panels.

“MPC plus AI, A Strategy of Both”

Recently, Model Predictive Control (MPC) and Artificial Intelligence (AI) have been utilized for reducing costs in HVAC building systems.  Both technologies, rooted in optimization, have undergone dramatic advances over the last several decades. For MPC, petroleum and pharmaceutical industries have realized significant cost savings in the process controls area. In AI, the emerging successes in academia and gaming has translated to practical applications that impact our daily lives. Self-driving cars and drones promise to push both technologies to new advancements.

We began to explore the nuances of MPC and AI technologies and propose an approach that adopts a strategy of both for the HVAC building domain.  By utilizing variable constraints learned with AI and used in the MPC framework, this approach promises to find an additional 5% cost savings over and above the traditional 10% that MPC currently promises with constant constraints. While still in the early stages, there are first generation MPC technologies ready to deploy this year.  The technologies of MPC and AI promise to bring high-tech solutions the building domain, propelling the current state-of-the-art to new levels.

Robert D. Turney received his B.S., M.S., and Ph.D degrees in Electrical Engineering from the University of Wisconsin-Milwaukee and has over 30 years’ experience in industry. From 1994 to 1997, Dr. Turney worked in the medical area as a DSP Systems Engineer designing medical imaging products, culminating with a first-to-market solution for real time lossless compression in cardiac imaging. From 1997 to 2008, he worked in the semiconductor area as a Senior Staff Research and Design Engineer specializing in multimedia, video and image processing algorithms and implementations in FPGA semiconductors. In 2008, he joined Johnson Controls in the Building Efficiency division as a Lead Staff Engineer. During his time at Johnson Controls, Dr. Turney helped establish state-of-the-art HVAC equipment controls utilizing model-based design and code generation methodologies. Dr. Turney is also currently an Adjunct Professor at the Milwaukee School of Engineering (MSOE) and the University of Wisconsin-Milwaukee (UWM) teaching courses in Electrical Engineering for 30 years. Dr. Turney is a Senior Member in the IEEE and has also been involved in the past with activities related to new ISO compression standards, namely JPEG2000 and MPEG-4 (H.264) and has served as the editor of MPEG-4 Part 9. Dr. Turney is currently an ASHRAE member and a senior member of the IEEE Controls Systems Society with over 75 patents granted or pending and over 100 publications and white papers. He is currently exploring the unifying technology of Model Predictive Control (MPC) combined with the technology of Artificial Intelligence (AI), specifically convolutional neural networks with reinforced learning for MPC constraints.

Over the past several decades, increases in computational power and advances in algorithms have allowed nonequilibrium molecular dynamics (MD) simulations to be applied to increasingly complex phenomena, including the response of materials to extreme mechanical and radiation environments. Current simulations may include billions (or even trillions!) of atoms, reach timescales of milliseconds, or model the interatomic interactions with quantum chemical accuracy. In my talk I will describe two ongoing efforts to advance these frontiers.

As part of the U.S. Department of Energy’s Exascale Computing Project (ECP), the Exascale Atomistics for Accuracy, Length, and Time (EXAALT) project is integrating state-of-the-art algorithms and codes for accelerated MD, large-scale MD with a wide variety of force fields, and density functional tight-binding theory, within a single interface.

Machine learning is emerging as a powerful tool to emulate electronic structure calculations, potentially replacing the empirical interatomic potentials (force fields) that limit the accuracy of MD simulations.  A key concept in our approach is active learning, which facilitates optimal training dataset generation using uncertainty quantification built into the neural network. Using the recently deployed Sierra supercomputer (#2 in the world), we have applied these concepts to develop neural network-based interatomic potentials for aluminum and tin, and performed large-scale MD simulations.

Tim Germann is in the Physics and Chemistry of Materials Group (T-1) at Los Alamos National Laboratory (LANL).  He received a Ph.D. in Chemical Physics from Harvard University, where he was a DOE Computational Science Graduate Fellow. Since joining LANL in 1997, Tim has developed and applied large-scale molecular dynamics simulations to the study of dynamic materials behavior, including shock compression and release, sliding friction, and detonation. He led the ASCR Exascale Co-Design Center for Materials in Extreme Environments (ExMatEx) and the ECP Co-design center for Particle Applications (CoPA). He is a Fellow of the American Physical Society (APS), past chair of the APS Division of Computational Physics, 2019 chair of the APS Topical Group on Shock Compression of Condensed Matter, and a member of the DOE Advanced Scientific Computing Advisory Committee. In 2019, he is taking on two new roles within DOE: serving as Chief Operating Officer for the Alliance Strategy Team of the NNSA Predictive Science Academic Alliance Program (PSAAP), and as ECP Co-Design technical lead.

“Active Learning in the Overparameterized and Interpolating Regime”

Overparameterized models that interpolate training data often display surprisingly good generalization properties. Specifically, minimum norm solutions have been shown to generalize well in the overparameterized, interpolating regime. This talk introduces a new framework for active learning based on the notion of minimum norm interpolators. The algorithm adaptively selects examples for labeling that (1) rule-out as many (incompatible) classifiers as possible at each step and (2) discovers cluster structure in unlabeled data and labels representative examples from each cluster.

Robert Nowak received his B.S., M.S., and Ph.D. degrees in electrical engineering from the University of Wisconsin-Madison in 1990, 1992, and 1995, respectively. He was a Postdoctoral Fellow at Rice University in 1995-1996, an Assistant Professor at Michigan State University from 1996-1999, held Assistant and Associate Professor positions at Rice University from 1999-2003, and is now the McFarland-Bascom Professor of Engineering at the University of Wisconsin-Madison. Professor Nowak has held visiting positions at INRIA, Sophia-Antipolis (2001), and Trinity College, Cambridge (2010). He has served as an Associate Editor for the IEEE Transactions on Image Processing and the ACM Transactions on Sensor Networks, and as the Secretary of the SIAM Activity Group on Imaging Science. He was General Chair for the 2007 IEEE Statistical Signal Processing workshop and Technical Program Chair for the 2003 IEEE Statistical Signal Processing Workshop and the 2004 IEEE/ACM International Symposium on Information Processing in Sensor Networks. He is a Fellow of the Institute of Electrical and Electronics Engineers (IEEE). His research interests include signal processing, machine learning, imaging and network science, and applications in communications, bioimaging, and systems biology. His Google Scholar page contains further information about his research and publications. 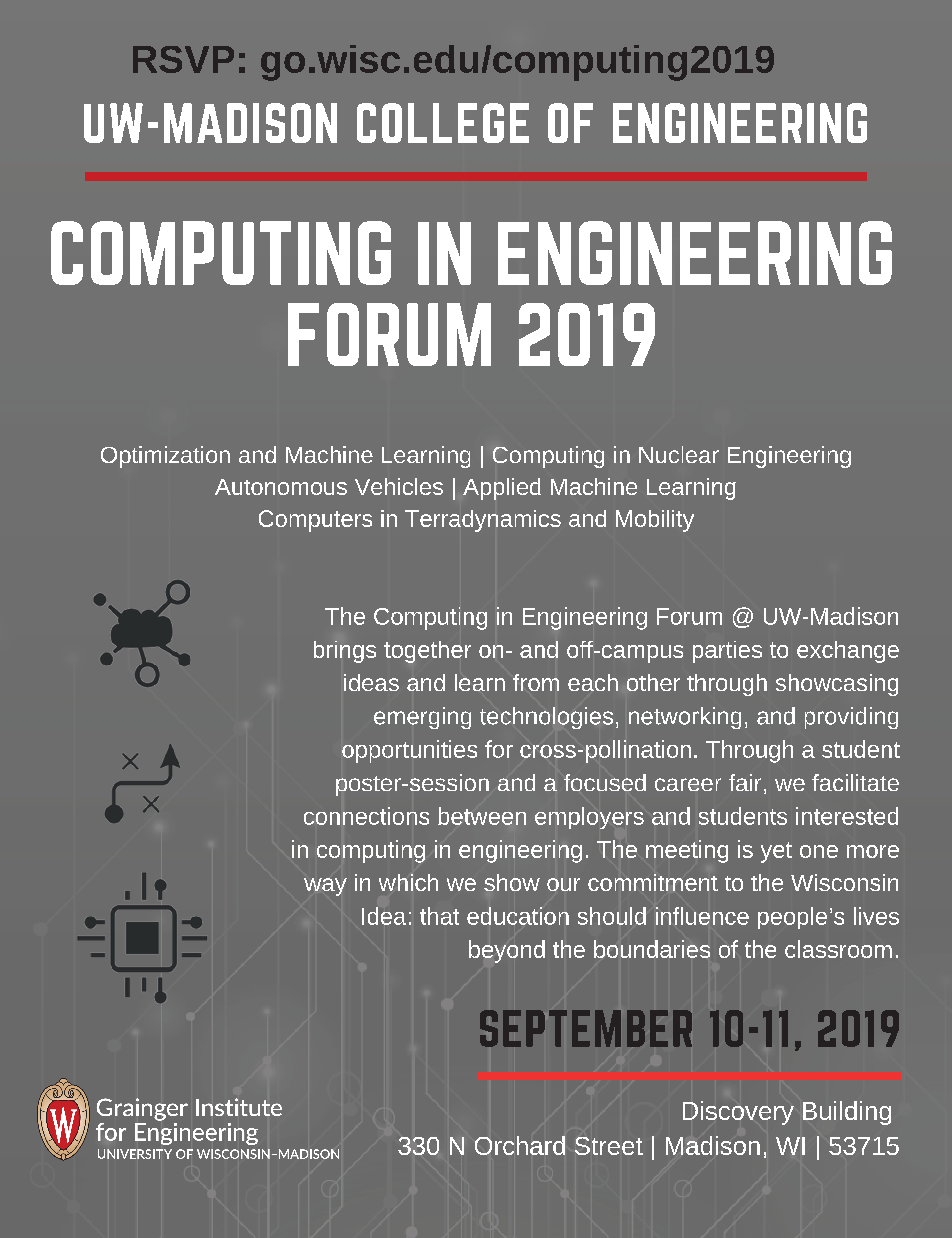 Join the Computing in Engineering Forum to hear the latest from UW-Madison experts in operations research, simulation-based engineering, and more!