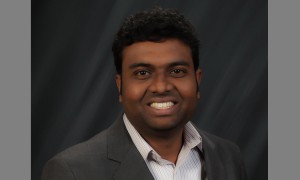 In January 2017, Shiva Rudraraju will join the Department of Mechanical Engineering as an assistant professor. Also an affiliate of the college’s Grainger Institute for Engineering, Rudraraju comes from the University of Michigan, where he’s been a graduate student, postdoctoral fellow and research scientist for 10 years.

“I’m really excited about what the College of Engineering and the Grainger Institute have to offer in terms of their collaborative environment,” says Rudraraju.

Rudraraju received his undergraduate degree in India. At Michigan, he studied failure in composite materials, especially in the context of aerospace structures. That research was in collaboration with NASA and Boeing. Following his PhD, Rudraraju was heavily inspired by the work done at the Computational Physics Group in Michigan. This helped him look at broader aspects of computational physics, primarily driven by high-performance computing, to understand multiscale processes in biological, structural and functional materials. In addition to collaborating with other computational physicists at Michigan and through the Department of Energy’s PRISMS center, Rudraraju collaborates with researchers at the University of Oxford on modeling growth and morphology evolution in biology.

Continuing that collaboration is one of Rudraraju’s three main goals when he arrives at UW-Madison in January.

“Going forward, a significant part of my research focus will continue to be in biology, especially looking at multi-physics processes and growth phenomena in biology,” Rudraraju says. “I’ll continue my exciting collaborations with the Computational Physics Group at Michigan and with the University of Oxford, where we are looking into the shape evolution in sea shells. This work has implications for understanding evolutionary dynamics.”

Rudraraju’s second goal is to continue his work in materials science, especially on multi-scale modeling which can potentially lead to the discovery of new structural and functional materials. He’ll especially focus on modeling the mechano-chemical processes in metallic alloys and battery materials.

Rudraraju is also very excited to leverage his strength in high-performance computing for developing new collaborations across the College of Engineering campus. He says that the Grainger Institute’s emphasis on transdisciplinary collaboration was a factor in his decision to come to Wisconsin from Michigan.

“The institute has this very active role in terms of collaborating in the discovery of materials and in advanced manufacturing,” Rudraraju says. “With my background, I want to look for active collaborations across the Grainger Institute and beyond.”

“When I was younger, my interest was primarily in physics,” Rudraraju says. “I knew I wanted to work on physics, especially mechanics and its applications, hence I chose to study and later continue research in mechanical engineering.”

After his undergraduate years, Rudraraju pursued internships at the Helmholtz-Zentrum Dresden-Rossendorf and Technische Universitat (TU) Freiberg, both in Germany, where he was introduced to the computational aspects of mechanics.

“It was a very organic route starting from my interest in physics, extending to computational mechanics and computational physics, and then to applications in materials and biology,” he says. “So I’m still primarily driven by that curiosity in physics.”