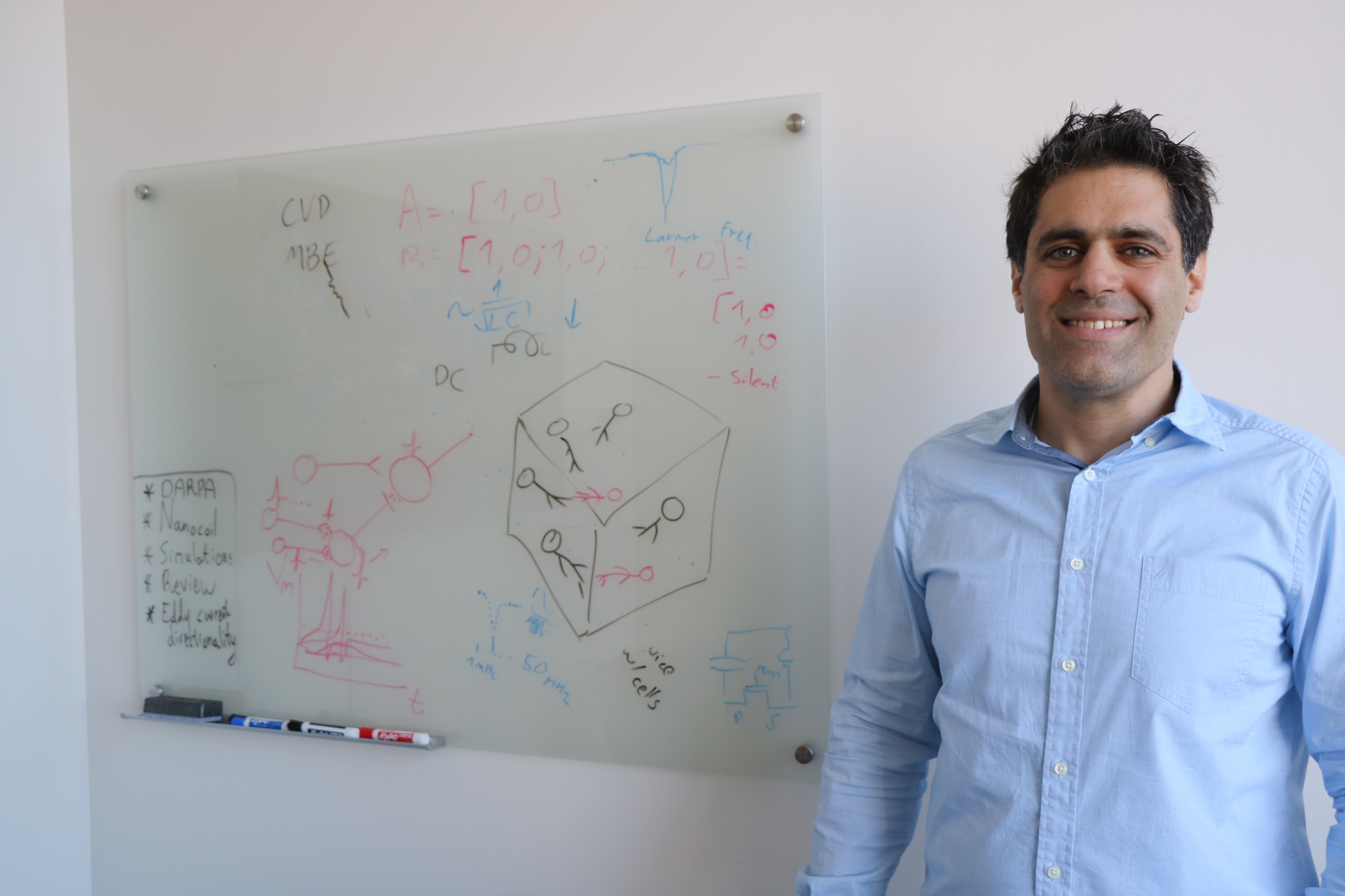 A magnetic resonance imaging (MRI) scanner can be used to take detailed anatomical snapshots of the brain noninvasively — without harming the brain. It can even detect changes in the flow of blood related to brain activation using what is commonly referred to as functional MRI (fMRI). Neuroscientists and neurologists have been using fMRI extensively to study the brain and to diagnose and monitor neurological disorders. But a longstanding difficulty with fMRI is the ambiguity of the measurements it provides and the fact that blood flow in the brain is only loosely related to actual electrical brain activity. The signals deep in our brain are electrical pulses generated by billions of brain cells, and at this time we can only read them with very invasive surgically implanted probes. Assistant Professor Aviad Hai and his team at the biomedical engineering department at UW-Madison are trying to solve this problem by developing new types of microelectronic sensors which will allow a typical fMRI measurement to become specific to electrical signals in the brain. These technologies can revolutionize the way we read brain activity.

“I feel that it’s a must, to understand the brain, to understand how it works, and we can’t do that without reading brain activity directly from the entire brain in parallel.” — Aviad Hai

Hai joined UW-Madison this past January after finishing his postdoctoral work at the Massachusetts Institute of Technology (MIT) and is excited about the “surge of research in neural engineering” that is occurring on campus. Neural engineering is an emerging field within the biomedical studies and uses engineering technologies to study the function of neural systems and to find treatments for neurological disorders. Research labs in this field at UW-Madison focus on minimally invasive methods to read from the brain and the development of implantable devices and materials for neuroprosthetics. Hai has also found that UW-Madison offers a more personal connection, “the people here are unique, there really is a spirit of Madison,’’ says Hai, adding that, “there is a deep sense of community between different departments when it comes to research.” Hai believes that this community-based environment at UW-Madison will provide outstanding support for his research.

Hai’s lab concentrates on developing minimally invasive tools that will allow access to the nervous system for studying brain function. Hai has been developing micro- and nano-electronic circuits that act similarly to a standard radiofrequency tuned antenna. This type of device is connected to a micro-transistor that senses electrical pulses in the brain. These pulses change the device’s resonance and result in a change in brightness of the MRI signal. This allows for brain activity to be monitored directly and is now opening the door to a better understanding of how the brain works, “I feel that it’s a must, to understand the brain, to understand how it works, and we can’t do that without reading brain activity directly from the entire brain in parallel” says Hai.

The human brain is the command center of the central nervous system. It receives information from all parts of the body and uses this information to make decisions and react, but exactly how it all works is still a great unknown. However, what we do know is: neurological discoveries won’t be made by just one person, but by a community of neuroscientists, engineers, and doctors working together. There are no physical borders between neuroscience and neuroengineering, only mental ones; similarly, there is no point where a scientist’s work ends and an engineer’s begins. Hai believes that we can do more to bridge the gap between medicine, science, and engineering to solve the hardest questions. By uniting neuroscience and engineering, Hai is advancing one step closer to seeing and understanding the whole brain.