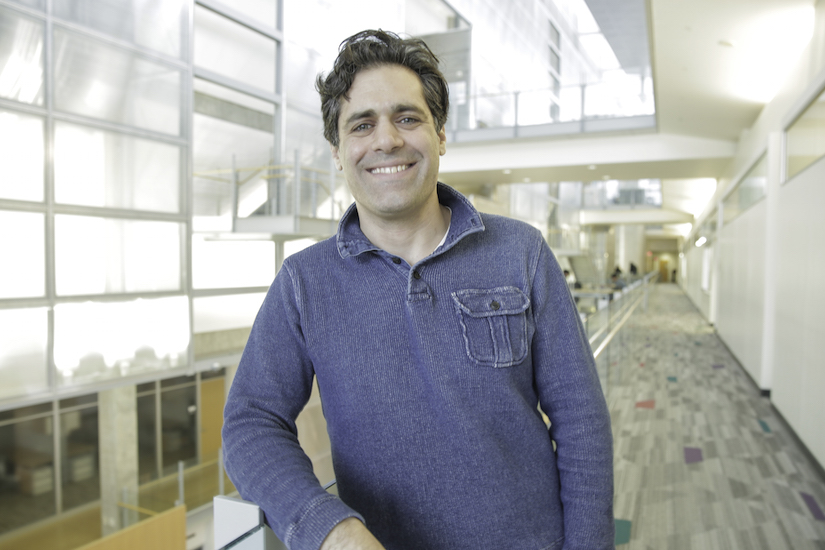 In order to read this sentence, multiple parts of your brain must work together, teaming up in a matter of milliseconds to string together letters into words and process their meaning.

And it’s not just cognitive tasks that span the brain’s regions; neurological disease and dysfunction do too. But when neuroscientists or clinicians want to track that activity, their options are limited to tools that either don’t directly record neural activity (like functional MRI) or require deeply invasive surgical procedures to provide merely a localized view (like electrode arrays).

Aviad Hai, an assistant professor of biomedical engineering at the University of Wisconsin-Madison, is developing injectable, wireless electronics that could circumvent those deficiencies—offering a global look at the actual electrical activity of the brain, all without the need for surgical procedures.

“Electrodes have given us a wealth of information about the neural code, the signaling, the commands that are being sent from the brain to other parts of the brain and to our peripheral nervous system,” says Hai. “Electrodes have been able to do that for just a very, very small region. So we’re actually blind to everything else. How do we break through this technological barrier? We need something that doesn’t require wires and is very small but still sensitive enough to talk to the outside hardware.”

Through the five-year grant of nearly $2.3 million, Hai and his lab members will use nanoscale lithography and fabrication techniques to create devices that consist of antennae and connected sensors. Those electronics can detect electromagnetic signals from deep within the brain and wirelessly communicate with MRI scanners, acting essentially as a dynamic contrast agent.

Hai’s group also plans to explore techniques to traverse the blood-brain barrier, as well as recording from brain vasculature, which he says would still yield unprecedented data.

He sees particular relevancy for the technology in studying epileptic seizures, building off a previous NIH grant, where it could deliver direct readouts of electrophysiological signals as opposed to tracking blood flow, as functional MRI traditionally does.

“Now you would be able to say more than just, ‘There’s blood flowing into this area.’ Does that correlate with a seizure? Maybe,” he says. “The idea is to be able to say what is the signaling that is actually happening there?”

As a member of the nascent Wisconsin Institute for Translational Neuroengineering—along with biomedical engineering colleagues Kip Ludwig and Justin Williams and neurological surgery researchers Aaron Suminski and Wendell Lake—Hai says the project dovetails nicely with the group’s philosophy of creating minimally invasive technologies with which to access the nervous system.

“We work to move away from those bulky, invasive techniques,” says Hai, who is also an affiliate of the Department of Electrical and Computer Engineering and part of the Grainger Institute for Engineering at UW-Madison. “We’re trying to solve these longstanding problems with brain technologies.”

Hai’s project is funded by NIH grant number DP2 NS122605-01 through the National Institute for Neurological Disorders and Stroke.